Julian and Giuseppe attended the National Ankylosing Spondylitis Society Members Day held in Birmingham on the 8th of June to give an overview of the research work carried in the Knight group, a substantial part being focused on the functional genomics of ankylosing spondylitis.

Julian gave a well-attended presentation highlighting some of the challenges of the work within the group to the audience made up of AS patients and their families, carers and health professionals. The genome-wide association studies (GWAS) results have shown the relevance of regulatory variant and the majority of reported associations have been found to involve non-coding variants. To take forward the results of GWAS and translate them into potential clinical benefits, we carry out research work to define causal regulatory variants, resolve their mode of action and identify the specific modulated genes and pathways which may be therapeutic targets. 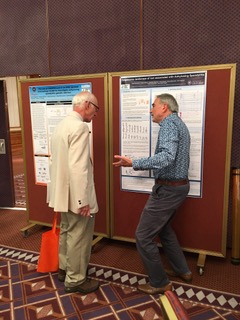